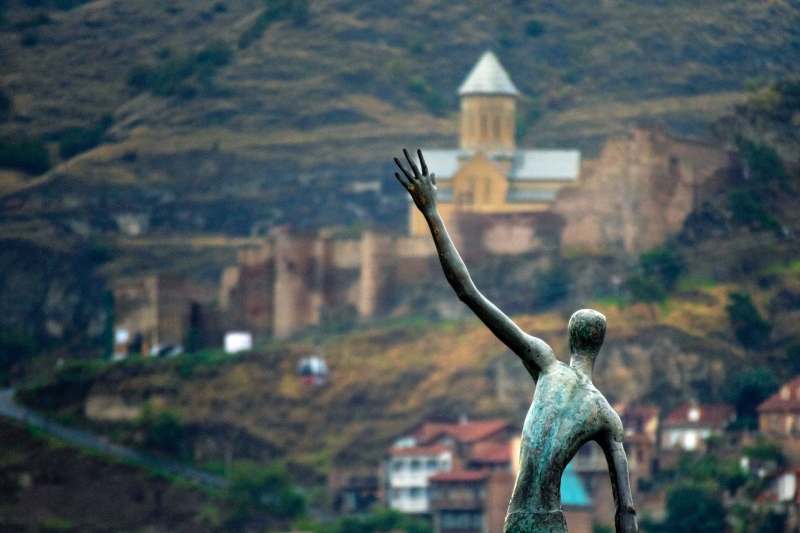 A Short History of Tbilisi

Tbilisi, the capital of Georgia, lies approximately 80 kilometers / 50 miles south of the imposing Caucasus mountain chain, which extends from the eastern shores of the Black Sea to the western shore of the Caspian and forms the northern boundary of the country. The city is home to roughly a third of Georgia’s total population, estimated at 3.5 million, and has a long history.

Known also as Tiflis, Tbilisi was founded in the fifth century C.E. Its strategic and commercial importance along the southernmost branch of the Silk Road made it a tempting prize, and over the next six hundred years, control of the city and surrounding territory passed from the Persians to the Byzantines, from the Byzantines to the Arabs, and from the Arabs to the Seljuk Turks.

In 1122 a native Georgian dynasty finally took power in the city, inaugurating what Georgians refer to as their “Golden Age.”  Unfortunately, this period of political independence and cultural flowering lasted barely a century, after which the Mongols invaded and renewed foreign domination of the country. The two most important occupying powers over the next eight centuries were Iran and Russia. Aside from three years of independence following the Russian Revolution of 1917, Russians maintained political control of the Georgia from 1801 until the country declared its independence in 1991. Russians again invaded in 2008 and occupied a fifth of the nation’s territory before a cease-fire brokered by France brought an end to the war.

Today Tbilisi is the economic center of Georgia, producing an estimated half of the nation’s yearly gross national product. Its diverse architecture reflects the complexity of the city’s past.  Byzantine, medieval, Art Nouveau, and Soviet modern styles are all present here, though relatively few buildings remain from the period before 1800.  On the other hand, Tbilisi is particularly rich in Art Nouveau buildings, a legacy of the final years of czarist Russia.

The Georgian capital has a lively cultural scene, with a symphony orchestra that records for Sony Classics. The Tbilisi Opera House was founded in 1851, making it one of the oldest in that part of the world. The cosmopolitan city is home to many foreigners. Since the Russian invasion of Ukraine in February, many predominantly younger Russians have fled there, seeking to escape the increasing political restrictions at home.

More than forty Georgian colleges and universities are located in Tbilisi.  Our host, Ilia State University, is the second highest ranked institution of higher education in the country and the leading research university in the South Caucasus.  Founded in 2006 through a merger among six different institutions, it operates 25 research centers and laboratories across the country, has a faculty of 275, and enrolls some 16,600 students in four different faculties.  Given this year’s IUT theme, Ilia State University’s twin focus on research and teaching make it an especially appropriate conference venue.

All papers presented at the Conferences will be available through this menu. Click on any year or category.